Sell the Pig by Tottie Limejuice


I have just finished reading Sell the Pig

by Tottie Limejuice (yes I know what a fantastic name and book title, but more about that later).  The book is the story behind her family’s move to the Auvergne in France, but it is not a normal ‘moving to France’ book and they are not your normal family unit either.

“What happens when dementia, depressed dipsomania and downright dottiness decide to uproot from the UK and move to France together.”

I felt I hit it off with Tottie right from the start of the book as we had so much in common, aside from quitting the UK and moving to France;

But, where I moved to France with only the quirky pets and a love for Terry Wogan’s breakfast show (plus a husband and young son), she packed all the above and more into a convoy of vehicles to start a new life in France – go Tottie!

It is not your average move to France book, where house in UK is sold, the car is packed with kids, cats and kettle, and the story really begins when the fun of life in France starts, but that doesn't make it any less readable a book as the issues they have to overcome to get themselves across the Channel would have put most people off even trying.  They are all looking to be together, but with separate space and each of them have specific and very different requirements.  I am sure there were many times when she wondered if they would get there.  There are funny moments, there are the heartfelt times when her poor Mother was being let down by the care system and there are great descriptions of the somewhat chaotic muddle their life became.  There are some great tales of dealing with estate agents and the lovely décor to be found in many French houses (although personally I see no problem with zany 1970s brown and orange wallpaper, in fact after 8 years I hardly notice it at all).  I thoroughly enjoyed reading it, and just the fact that she describes the story behind her fantastic pen name and the reason for the title of the book made it a worthwhile read, although I did feel it ended too soon.  I do hope she continues writing so we can find out what happens next.

Have a look at Tottie’s Book Blog for photos and more stories,see here. 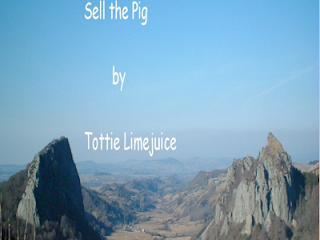