Welcome back to my terrace where Julia and I are having a good old natter about all things French, and especially the food.

FVD: Now you are not running an auberge, is food (and cooking) still an important part of your day, or just something to satisfy hunger?

JS: For the first twelve months out of the auberge, things were really hectic. We moved house four times, I was settling in to my writing life which involved lots of trips to London and lots of promotional work which took me away from home, so it was a relief not to be cooking on a regular basis. But I still remember the first meal we cooked when we no longer ran the restaurant. It was amazing. A really simple dish of Toulouse sausages braised in cider and served on sage mash potato. It had been a firm favourite with guests in the auberge but we had never sat down at a table and eaten it ourselves! We really savoured that meal. As for now, food is still important but it is no longer as stressful!

FVD: Ooh, that cider sausage dish sounds lovely, might have to give that a try, thanks.  What would be your favourite French dish?

JS: Ooohhh – I love a good cassoulet, as anyone who has read my books will know! And magret de canard, if it is cooked to perfection, is delicious. But I really don’t think I have a favourite dish. Although I know I like things uncomplicated! The best meal I’ve ever had in France was in a small restaurant in Paris, below the Sacré Coeur. It was a simple civet de porcelet but was delicious. A house red. Crusty bread. That’s what makes me happy.

FVD: Did you try to introduce English ingredients to the menu at the auberge?  Did you ever try to sneak Marmite in?

JS: No Marmite – unless it was for cooking in! Horseradish was probably the only ingredient we had to explain to guests. It doesn’t seem to feature much in French cooking. And we did sneak in the odd English-style dessert. Crumble is very much en vogue so we served a lot of rhubarb crumble (the guests loved the fact they could see the rhubarb growing in the garden!). We also introduced guests to pavlovas and amazingly, although it’s not British, to tiramisu! I still can’t believe one of our neighbours could have lived a proportion of his life in Paris, retire back to the Pyrenees and not know what tiramisu was… He quickly became a convert!

FVD: I love my cakes and am lucky enough to live 2 doors away from our village boulangerie, what do you prefer, the French éclair-au-chocolat with the chocolate crème patissiere filling or the English chocolate eclair with a whipped cream filling?

JS: The French éclair every time! The French win hands down when it comes to patisserie. But if we’re talking about puddings…now that’s a different matter! A good sticky toffee pudding has no equal across the channel. So French cakes for elevenses and British puddings after dinner!

FVD: Yum – couldn’t agree more!  Still on a food theme (no surprise there), coffee – do you prefer yours in a cup, mug or bowl?

FVD: What are your views (if any) on dunking bread, croissants or chocolate into your coffee?

JS: …to dunk my pain-au-chocolat! I’m a late convert to this. Spent years clearing up messy breakfast dishes with flakes of croissant stuck to mugs and coffee slopped on plates and never quite saw the attraction. Then we visited a friend of ours in Saint-Nazaire and he’d laid on breakfast for us. No plates. Just a mug of coffee and croissants. He proceeded to dunk his croissant and made such a noise of ecstasy on eating it that I copied him. And I’ve been hooked ever since. Try it. It’s gorgeous.

FVD: Umm, no thanks!  A square of dark chocolate dunked in my espresso coffee is all that is permitted ‘dunkable’ here I’m afraid!  What do you prefer sliced white loaf or a baguette?

JS: Neither. I find most baguettes pretty tasteless (I share my character Serge Papon’s view on mass produced bread!) and from an auberge owner’s perspective, inedible a couple of hours after buying and so a waste of money. Luckily we had a bakery nearby that made bread the old-fashioned way and so we were able to get delicious crusty loaves that were close to wholemeal. They kept well (important for the business!) and tasted divine.

FVD: I have to say wholemeal is something I miss (a lot).  Moving away from food and back to the writing, how long does it take you to write a book?  And are you disciplined enough to spend a certain number of hours a day at your desk?

JS: I think the only answer to the first question is ‘as long as I have’. The first book for most writers is written without any deadline. Or any hope of publication! So it can take as long as you want. My very first book (which is in a drawer!) took five years to write - because I had a fulltime job, I moved countries three times in that period and I didn’t really believe I would ever get published. My second book, L’Auberge, took two winters to write. I had no time between March and October, the auberge occupying every waking hour, so once the season was over, I would get back to the writing. Then I sent it off to a literary agent and got a contract with a publisher and suddenly, they wanted the next book within 9 months. Gulp! So The Parisian’s Return took a lot less time to write in terms of months but I was writing full time so it probably took the same amount of time in hours. And that is my pattern now. A book a year. Which I guess answers your next question. Yes, I’m disciplined. In today’s market, every writer who is published has to be as there is such a wealth of talent out there, if you don’t get your ideas down on the page and in to the publisher, someone else will take your place.

FVD: Did you write when you were in France, or maybe have the idea of the Fogas books while you were there?

JS: Totally. We actually moved to the Pyrenees to give me a chance to write. It took a few years to sort out the business but once the auberge was running well, I found more and more time to think and create. Amazing what you can do while ironing sheets or hanging out towels to dry! And yes, the Fogas books were inspired by the area we lived in and came into being because I’d had my first book rejected. I was looking out of the window of the auberge and I could see the neighbour’s bull (very like Sarko in the books!) and I started thinking about how he was always misbehaving and suddenly I had loads of ideas. I scrawled them down on paper and saw that I had enough for a series of books. And the rest…was a lot of hard work which has all been worthwhile!

FVD: You have just finished writing the third book in the Fogas chronicles (and I personally can’t wait to read it), can you tell us a little bit about what we can look forward too?

JS: The third instalment is called The French Postmistress which, if you’ve read the first two, you will know is going to be about Véronique Estaque, the postmistress of Fogas. But in true Fogas style, it’s about more than just her struggle to reopen the post office. It’s also about the government programme to reintroduce bears in the Pyrenees and the havoc this causes to the rural way of life; it’s about community and identity and the pull of one’s roots; and it’s about life in a small village where everyone knows everything about you, sometimes before you even know it yourself!

FVD: (Jumps up and down in excitement)  Any idea when we will be lucky enough to get our hands on a copy?

JS: The proposed publication date in the UK is early summer 2013. I’ll keep readers updated on my facebook page (www.facebook.com/staggjulia) and on my website (www.jstagg.com). There’s a new cover design underway too so the books are about to have a radical makeover. I’ll post more information on the sites above as I have it.

FVD: Are there any more tales to tell from Fogas?  (Please say yes).

JS: Ha – thank you! Yes. I’m working on the fourth book and there will be another to follow. After that, I’ve got a few ideas but they are in the formative stage…

FVD: Phew, so glad to hear that!  You have appeared at The France Show, talking about the books and your French life, are you going to be there next January?

JS: I’m not sure about the France Show – I hope so but I’m still waiting for confirmation. I will, however, be appearing at the French Property Exhibition at Olympia in London (5-7 Oct 2012), giving seminars on learning French and also promoting my books. And trying not to be tempted by all of the amazing properties on sale! Hopefully I’ll see some of your readers there!

FVD: Oh how I would love to escape my French village and be in London next weekend, never mind!  Good luck with the books and thank you for taking the time to answer my questions.

JS: Mon plaisir! (Do you mind if I just sit here a bit longer – the view is amazing…!)

FVD: Oh you are too kind!  Stay as long as you like, so long as I don’t find you dunking your pain-au-chocolat in the morning!  Don’t forget to say hello to Julia (and please feel free to mention me) if you are lucky enough to be attending the French Property Exhibition in London next weekend. 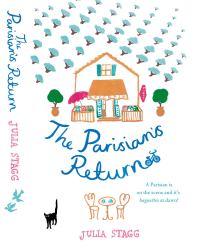 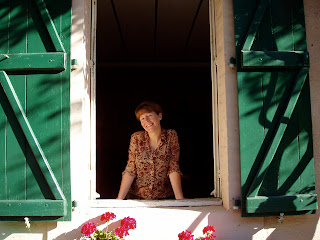