A Whatever the Weather Weekend

We have had a ‘whatever the weather we will enjoy ourselves’ weekend.  Ade’s parents have been over and as is usual for one of their visits the weather was horrid.  I appreciate it was nowhere near as bad as in the States recently but the fields, ditches and roads between our village and local town were the wettest I had seen them in over eight years.  On Friday morning the car was sat in a huge puddle and visibility on the airport run (a two hour round trip) was in places almost nothing.  Friday evening was a special one as in their honour we fired up Big Bertha the central heating boiler for the first time this winter. 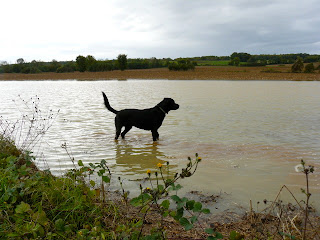 Were we going to let this put a dampener on our weekend – we were not!  Following a boulangerie made croissant and fresh coffee breakfast on Saturday (who isn’t cheered by that?) we took Mini out for a walk that was almost dry.  Having spotted three deer she gave chase for a minute or two before bounding back to us and flopping down in what looked like a lake but was actually a waterlogged field, for a cool down.

The afternoon was spent at a local Foire aux Vins et à la Gastronomie (food and wine fair) where we nibbled, sipped and chatted to some happy, friendly producers.  We all agreed the homemade chocolates looked mouth-wateringly delicious, but unfortunately they were eye-wateringly expensive, so we moved onto the unusual jams made over on Ile de Ré.  Not quite sure how or who came up with the innovative idea to make jam out of potatoes, maybe it is just an island thing. Although there was a real mashed potato texture, the flavour seemed to be all about the rum that had been added.

We met an old friend, our wine man M Vilneau with his Vins de Pays Charentais wines.  A quick catch up chat, a tasting (bien sûr) and we left with a box of six 2010 Merlots.  He reassured us that 2012, for him at least, had been a good harvest, thanks he says to the hard work he put in, so there should be no shortage of his fine wines.  What goes better with wine than cheese, and the little round man with his round Basque beret and his delicious sheep’s milk cheeses was only too happy to let us taste his wares.  He also gave us a leaflet showing his Basque farmhouse in the Pyrenees bedecked with strings of chillies drying in the sun and where he said we would be most welcome if we were ever in the area.  By far the most friendly of the producers was the dried meat and sausage man.  His ‘beef’ was from aurochs, the ancestor of domestic cattle that has been bred back from extinction and his pork only from black pigs and he was very proud of his animals.  His garlic sausage was delicious, sweet and moist, and thinly sliced made a fantastic apero for our Saturday evening.  We shunned the TV and entertained ourselves with old-fashioned family games like Charades and Consequences and had lots of laughs. 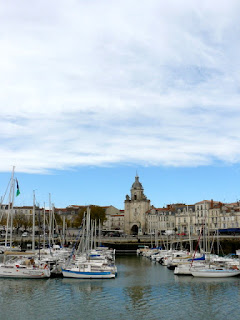 Sunday was spent in the lovely city of La Rochelle, where a day out never disappoints whatever the weather, but was especially nice as the sun came out to join us in the afternoon.  We walked, browsed, ate and had a great day.  As could have been predicted, by the time Ed and I arrived home from the airport this afternoon the sky was blue, the sun was shining and the temperature had climbed to 14 degrees.  Never mind, it was a superb weekend and I feel thoroughly spoiled.
Posted by Jacqui Brown at 2:40 PM
Email ThisBlogThis!Share to TwitterShare to FacebookShare to Pinterest
Labels: Food, France, La Rochelle