Welcome back to Paris week, where today it is all about food. I really enjoyed the BBC cookery show with Rachel Khoo ‘The Little Paris Kitchen’, so I treated myself to the cookbook. Rachel has the tiniest kitchen possible in a tiny Paris apartment with a beautiful rooftop view, but turns out the most amazing traditional French dishes, all with her own personal twist – and get this, even the Parisians who try them enjoy them. Chapeau Rachel! According to Rachel’s website (see here) the series is now being shown in various overseas countries, so if you do get a chance to watch it I’m sure you’ll love it. I also really hope we see more from Rachel on the BBC, although as she is busy working on another book there are no immediate plans. 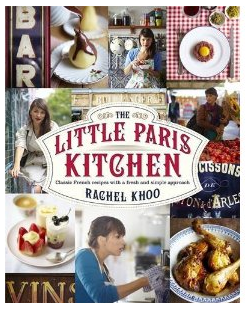 The Little Paris Kitchen: Classic French recipes with a fresh and fun approach

cookbook is a beautiful hardback, published by Penguin Books, and is too good to be hidden on a bookshelf. It is illustrated with Rachel’s own drawings and some super photos of Paris, food and Rachel, by David Loftus. There seems to be no end to this lady’s talents, she cooks, she has a natural style on camera, she is pretty and she draws the cutest little foodie pictures. With nearly 300 pages packed with recipes the only difficulty was which recipe to try first. As with most of my new cookbooks it became bedtime reading before being splattered and used in the kitchen. It is split into sections that include ‘Aperitifs’ and ‘Dinner with friends and family’ to ‘Everyday cooking’ and ‘Summer picnics’, so there really is something for everyone, and the knowledge that Rachel has tried and tested everything in her tiny kitchen makes it all seem possible to do at home.

As both Ed and Ade are meatball lovers they were the perfect taste testers for the ‘Meatballs in spicy sauce with Alsatian pasta’ recipe.  From my point of view the recipe worked very well, and the boys gave it a tasty thumbs up.  Many of the recipes are based on traditional French ones, but with a fresh new something added by Rachel. I thought this was great, especially the ‘Nids de tartiflette’ which are so much lighter than the traditional heavy tartiflette.

My French friends often ask me if I cook French or English food, and when I think about it I have to say it is my own mix of the two. It is certainly not what I used to cook when I lived in the UK, nor what my parents cook, but it is not traditional French either. This is just another benefit of immersing yourselves in another culture, and I like to think that by sharing my traditional English dishes with my French friends, like mince pies at Christmas, I am also widening their culinary culture too.

The Little Paris Kitchen is available from Amazon.co.uk and all good bookshops.

Posted by Jacqui Brown at 10:41 AM
Email ThisBlogThis!Share to TwitterShare to FacebookShare to Pinterest
Labels: Books, Food, France, Paris, Reviews