, by Peter Robert Scott is an historic novel set in a village in western France. The setting is the Marais Poitevin region, a reclaimed marshland area with a picturesque canal network that we know well. My main interest to begin with was the familiar location, but I soon found the information on the effect that the Second World War had in this area to be fascinating. Being in the west of France we are not in an area that was directly affected by the ‘battles’ of war, but that doesn’t mean the area was untouched by the troubles and it was interesting to learn more about the day to day life and Occupation in the war years. 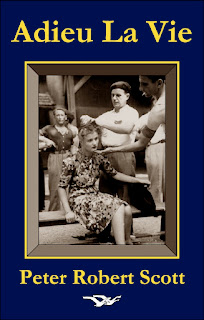 The story does jump from present day (end of 1999) to the war years and back again quite a bit as the main character Bernard tries to piece together a mystery surrounding a murder. Thankfully there is a handy character list at the front of the book for reference while you settle into who is who. Bernard originally left the village in his youth, but is back to spend some time with his sister-in-law following his brother’s recent death. Marlène’s behaviour is out of character and her family are concerned, has she simply lost the plot since her husband’s death, or is there really a score to be settled after all these years? Many people have secrets from the Occupation when the Germans became a part of village life, some moved on but others were not able or allowed to forget. Bernard revisits places and a time he has long since left behind, but can he help Marlène?

For me, the fascination was in the history and I liked the pieces set in the war years the best, possibly as there was more life in the village then. The character of ‘old’ Bernard seemed a very difficult man to warm to, but there is a great tale of family love that spans the generations and a good bit of village politics and tittle-tattle too.

Adieu La Vie is available in paperback (£6.29) or kindle (£1.97) from Amazon and I would like to thank Peter for sending me a copy to read and review.