Book review of Murder Below Montparnasse by Cara Black 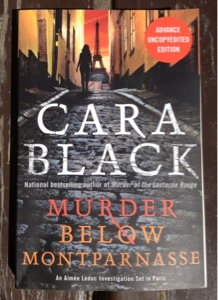 is the latest book (number thirteen) in the Aimée Leduc detective series by Cara Black. Thirteen may be unlucky for some, but seems to be lucky for me as although it was my first rendez-vous with Aimée not having read the previous books didn’t hinder my enjoyment at all.

I have read many books set in Paris, but I think this one, more than most took me to Paris. Cara may have been in the middle of explaining a crucial part of the plot, but still took the time to describe the Paris Aimée sees out of the window as the story moves along. I liked that and especially as her descriptions brought Paris to life. Set in the once-chic area of Montparnasse we dip into the art world and the closed Russian immigrant community too, both of which I found interesting. Before Aimée can begin her latest task to protect a painting that may be a Modigliani, the old Russian man, Yuri, who made contact with her is murdered in his kitchen and the painting has gone. It soon becomes obvious that Aimée is not the only one looking for it and every time she seems to get a little closer another death occurs from her list of suspects.

Those who are familiar with the series will be aware that Aimée’s father started the detective business she now runs and that her mother left them when she was a child and has been on the Interpol wanted list for 20 years. To add a personal twist to this tale Yuri hints he has met with her mother but before she can find out more he and the link he provided is gone. Throughout her enquiries the presence of her mother is felt, and Aimée gut feeling is that her mother may be involved in the murders. Who to trust, who to avoid and how to stay safe make it an action packed read that kept my interest and excitement up throughout.

I will certainly be adding the other books in this series to my wish list. This book is available on Amazon, but only in hardcover at the moment.