I like to think I am a fairly chilled and relaxed person. In fact it is very rare to hear a raised voice in our house, although as Ed has yet to become an official teen this may well be set to change. If something irks me I may well have a little growl, but I am unlikely to take any direct action – I did enough screaming, shouting and stamping my feet as a child/teen to last me a lifetime.

Recent events have led me to believe this lack of emotion on my part means I will never be a true Frenchman. In the last few weeks the French farmers have been cross. They have said they are cross, but being an emotionally charged bunch saying it alone is not enough so they have shown us just how cross they are. 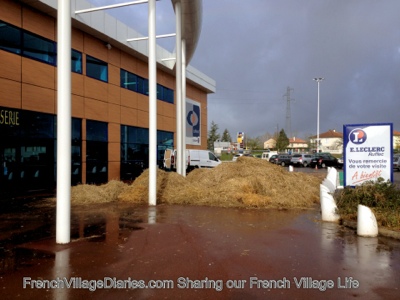 This picture shows our local E.Leclerc supermarket early last Friday morning, looking and smelling much more rural than usual thanks to the local farmers who covered it’s entrance with used farmyard straw. They feel the supermarkets are responsible for the low prices they are currently being paid. This action, along with overnight removal of the trolley wheels from other supermarket car parks has become quite widespread.

While I can sympathise with them it was the supermarket staff I felt more sorry for on Friday. They have no power over the decisions or policies that have upset the farmers, but it was them who were out there wielding shovels full of cow shit, hosepipes and brooms to clear a pathway to the store. The farmers also need to understand that there are many more professions who are all in the same boat. In the six years we have been running our company Ade’s daily rate has gone down, not up. In addition to this, a job used to be paid on the basis of his daily rate plus all travelling and accommodation expenses, but now the rate is lower but must also include all these expenses. This is just something we have to accept as the economic climate has changed, but I will admit this has taken quite a large chunk of our income and this is before we get hit by the £/€ exchange rate fluctuations.

Food in France is generally more expensive than food in UK supermarkets, so I’m guessing the French farmers already get a better price than their UK counterparts. This has led to quite a few entrepreneurs setting up delivery companies that enable expats to buy their weekly shop online in the UK and have it delivered to France for a small additional charge. Although this is not something we have used it goes to show that we are not alone in having to carefully watch every cent, the economic world has changed and the farmers need to realise this too.

I like to think I am pretty good at budgeting so do not waste food or money from our weekly shop, but if prices rise much higher I will have to vote with my feet and cut down on what we buy, an action which will probably not help the farmers either. C’est la vie!