Cycling in the Charente 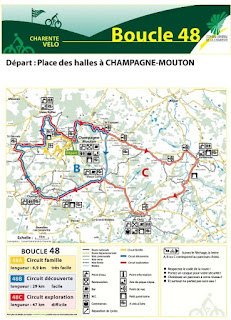 On Friday we escaped the cherry picking, packed the bikes and a pasta-pot picnic and set off to the nearby town of Champagne-Mouton just to the east of us in the Charente, where we followed the Charente Velo Boucle 48C, a 47km marked route. There are also 7km (48A) and 29km (48B) routes available from this start point. For details on many more cycle rides in the Charente we use the great information on the Bike Hire Direct website, here. 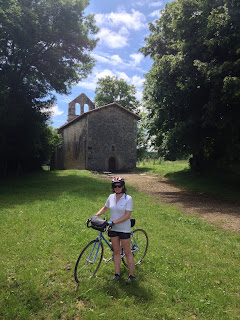 Following the epic rain of Thursday and a misty start to Friday morning, the sun soon triumphed and as the mist lifted the temperature rose and the weather was perfect for the undulating route through the pretty hamlets of the Charente-Limousine area. The route, which like all the Charente Velo Boucle’s we have cycled, was well signed and mostly avoided the main roads. The small back roads wound through tiny hamlets, some with neat manicured lawns, pots filled with summer flowers, climbing roses in full bloom and one even had a water lily filled pond. Others seemed very run down and forgotten with houses shuttered up, cracks in the stone walls and no signs of life. The scent of the roses lingering in the air as we cycled past, the hedgerows heavy with elderflowers and the freshly mown verges was delightful and it’s just as well we’re not hayfever sufferers. Most of the hamlets had at least one house that had at least one huge old cherry tree and in all of them was at least one old couple with their buckets, bags, ladders and sticks harvesting this years cherries - just what we should have been doing!

Just over half way we stopped for our customary beer in the quaintest bar we’ve found around here. It was not much more than a few tables in a front room. Two beers were brought out to us on their terrace over the road that looked like it was once a village petrol station. Seeing as only one car drove through when we were there I guess it is no surprise it has closed.


This is an area of many rivers and we crossed the River Charente a few times in the first half of the ride and then later on the smaller rivers L’Argent (silver) and L’Or (gold). At the end of the route we cycled along the old railway line where we found ourselves riding by platforms and a lovely old viaduct that we had driven past on the main road many times. This was a lovely, easy afternoon ride that we will be doing again, hopefully this summer.