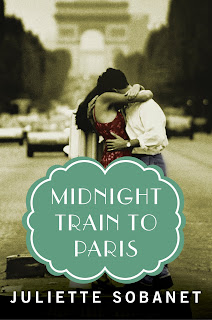 and Kissed in Paris

(read my reviews here and here), and I'm delighted to share a sneak preview of her new novel Midnight Train to Paris

released today. Juliette is a true Francophile and I was lucky enough to chat to her recently for my France et Moi interview feature, see here. She earned a B.A. from Georgetown University and an M.A. from New York University in France, living and studying in both Lyon and Paris. She worked as a French professor before turning a new page in her career, penning romantic women’s fiction with a French twist. She has also been busy with her upcoming novels Dancing with Paris

and Honeymoon in Paris (A Charlotte Summers Novel, Book 2)

. Today she lives with her husband and two cats in San Diego, where she devotes her time to writing and dreaming about her next trip to France. You can find her on her website, Twitter, or Facebook.

Thanks so much for having me, Jacqui! Today we’re celebrating the release of my latest France-based novel, Midnight Train to Paris! This book was originally released as a Kindle serial on Amazon US, but it is now available as a full-length novel in print and e-book on Amazon UK, Canada, France, and all other Amazon sites!

Here’s a little more about the story:

When hard-hitting DC reporter Jillian Chambord learns that her twin sister, Isla, has been abducted from a luxury train traveling through the Alps, not even the threat of losing her coveted position at The Washington Daily can stop her from hopping on the next flight to France. Never mind the fact that Samuel Kelly--the sexy former CIA agent who Jillian has sworn off forever--has been assigned as the lead investigator in the case.

When Jillian and Samuel arrive in the Alps, they soon learn that their midnight train isn't leading them to Isla, but has taken them back in time to 1937, to a night when another young woman was abducted from the same Orient Express train. Given a chance to save both women, Jillian and Samuel are unprepared for what they discover on the train that night, for the sparks that fly between them...and for what they'll have to do to keep each other alive.

Midnight Train to Paris is a magical and suspenseful exploration of just how far we will go to save the ones we love.

If you’d like to board the midnight train to 1930s Paris, here is a sneak peek of the opening scene…

Rosie Delaney stood on the empty platform, gripping the handle of her cherry-red suitcase with ice-cold fingers. She desperately wished that she’d remembered her gloves.
Thick, heavy snowflakes poured from the black winter sky, dusting the tracks in an eerie white glow. Save for the giant clock ticking overhead, the silence in the Swiss train station that night was deafening to Rosie’s ears, which had never been so alert.
Despite her nerves, Rosie was certain she’d covered her tracks well. She’d put on quite the show with Alexandre before slipping out of the annual Morel Holiday Gala unnoticed. She’d even resisted the overwhelming urge to say good-bye to the one person she would miss.
Her mother.
Swallowing the lump in her throat, Rosie thought of the lovely sights of Paris and the even lovelier man who would be waiting for her there, in her favorite city, in only a few short hours.
Jacques Chambord.
She’d made the right choice.
Of course she had.
She’d left behind a closet full of shimmering evening gowns, fur coats, jewels, and high heels. Her meager suitcase contained only a few changes of her most practical, modest clothes and a box of letters.
Those letters meant more to her than any jewel-studded closet ever could.
Running her thumb over the newly bare skin on her ring finger, Rosie remembered how suffocating Alexandre’s elaborate diamond ring had felt on her left hand. And it wasn’t only the ring that had been suffocating.
The memory of him made her forget how to breathe.
If only the train would get here.
A nervous glance at the clock revealed that it was 11:37 p.m.
They would surely be wondering where she had gone by now. She could almost see Alexandre’s dark furrowed eyebrows, his beady brown eyes combing the party, searching for his fiancée, his trésor, his poupée.
Rosie was finished being Alexandre’s treasure, his doll.
She was finished keeping him and his elitist, power-hungry family happy.
A train whistle thundered through the night, and adrenaline shot through Rosie’s veins as she glimpsed the steam locomotive barreling down the snow-covered tracks.
Only one word soared through Rosie’s mind at the sight of the Orient Express on that snowy winter night in the Swiss Alps.
Freedom.

Thank you Juliette and good luck with the new releases. I can't wait to read the rest of Midnight Train to Paris and I'm really looking forward to your other new books later this year, especially Honeymoon in Paris and catching up with Charlotte.

Falling for a French Dream