This summer is turning out to be a year to remember the Tour de France, from when it exploded into life at it's grand depart in the UK to watching with despair as some of our British hopefuls crashed out spectacularly. My author friend and Tour de France fan Julia Stagg was in Yorkshire to experience the start and shares her day with us here.

It was like inviting an exotic friend from much warmer climes to come and have a barbeque in your back garden. The whole of Yorkshire watched the weather for weeks ahead, an anxious eye on the nightly forecast, fingers, toes, arms crossed in hope. We were about to host the Tour de France and what those of us living in this beautiful county wanted above all else was sunshine. And a chance to impress.
The morning didn’t start off auspiciously. Low mist hugged the hills, a cold breeze tugged at cycling jerseys and goosebumps rippled flesh as we rode down into Hawes. Then the climb up Buttertubs, the heart pounding, the breath ragged as legs turned pedals, weaving in and out amongst the walkers. So many walkers. And all of us traversing the newly laid tarmac that the peloton would soon be cycling over. 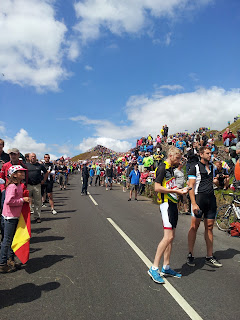 We were in position by nine thirty, blanket on a bit of hillside, bikes stowed behind us, and by ten o’clock, what had been a fairly steady stream of people climbing the hill became a deluge. Families, couples, cycling clubs, people dressed as onion sellers, people dressed as sheep, people with flags and the children, so many children. If anything marked this stage of Le Tour as different to all the stages I’ve seen in the Pyrenees, it was the children.
They were all ages. Young teens on proper road bikes, in full kit, thin legs pumping furiously as they cycled uphill to roars of approval. Youngsters on small bikes, pedalling hard, a firm hand reaching out from the crowd every now and then to push them for a few paces as klaxons sounded. And the little ones, the tiny ones on bikes being towed along by dads, waving like chauffeur-driven royalty as cow bells heralded their approach. ‘I have to tell you son,’ said one cycling father to his beaming child who was riding alongside him, the tumultuous approval of the watching hordes giving him a taste of being a professional rouleur, ‘it won’t always be like this!’

By the time the helicopter sounded overhead, we’d forgotten to worry about the weather. We were too busy having a party. The publicity caravan went through in a blur of festivity and then they were here, the men of Le Tour, bronzed legs, colourful lycra, a tunnel of noise welcoming them onto Cote de Buttertubs. Allez allez called out the crowd. And the sun burst from behind the clouds and the Dales looked magnificent.


Within minutes they’d passed and a collective sigh eased out from the thousands gathered on the hillside. We’d done it. We’d invited them here and we’d given them a day to remember. We’d even made the sun shine. The only question left to ask is when can we do it all again?

Thanks for sharing and the great photos Julia. I was lucky enough to be in London to see them arrive on day three and I will share my day with you soon.

Julia Stagg writes fiction set in the Ariège region of the French Pyrenees, an area she discovered through her passion for cycling. Her latest novel, A Fête to Remember, is available now (Hodder & Stoughton £7.99).
www.jstagg.com
@juliastagg
https://www.facebook.com/staggjulia