Book review for The Rocheforts by Christian Laborie

Today I’m taking part in a virtual book tour via France Book Tours for The Rocheforts: A Novel

Synopsis provided by the publisher.

Two very different families are bonded by scandal in this sweeping story of love, greed, and betrayal. Anselme Rochefort has built an empire manufacturing serge de Nîmes, or denim. His biggest client? Levi Strauss. As the craze for blue jeans begins to sweep the globe, Rochefort Industries seems poised for untold success. But Anselme can be as cruel and ruthless with his family as he is in business. The Rocheforts’ neighbour Donatien Rouvière has one of the region’s most prosperous farms and is desperate for a son to carry on his legacy. After the births of three daughters, the Rouvières adopt an orphan from the Sisters of Charity convent and raise him as their own. When Anselme suggests uniting the two families by arranging for their children to marry, it seems like the perfect match. But as the lives of the two clans grow increasingly intertwined, dark secrets come to light, including the mysterious circumstances of the death of Anselme’s eldest daughter. With The Rocheforts, Christian Laborie weaves a captivating tale of deceit, intrigue, and the dynamic tension between industrialization and a way of life rooted in the land.

My review.
This is a family drama set in the early 1900’s when the farming of silk worms in the mulberry trees of the Cévennes and the denim and silk mills in Nîmes were big businesses. We meet two families, the Rocheforts and Rouvières whose different backgrounds and lifestyles don’t stop them being bound together in drama and deceit. The Rochefort men were ambitious and proud (to the point of arrogance) which often led to heated disputes that threatened the family unit. The Rouvières were more down to earth and honest, but fate stepped in more than once to entwine their lives together. The characters were all very different and I enjoyed the way they developed throughout the novel, some were not to my liking at the beginning but I warmed to them in their latter years. The women were the ones who I felt demonstrated the strength and intelligence to hold their families together.

This isn’t a fast paced excitement filled read, but with an underlying current that I knew would come to a head at some point, there was plenty of interest to keep me page turning. I really enjoyed the historical backdrop of this novel, as I knew very little about the silk and denim production process. It was fascinating to follow the family dramas played out alongside the farming of the era and the more industrial life of fabric making at the mills. I love the Cévennes region in France and am looking forward to going back there soon and now a visit to Nîmes is on my agenda too.

I would love for there to be a follow up novel. This book saw them through the years from 1898 to 1929, but how will the Second World War affect the families? 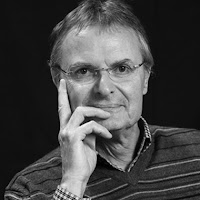 Christian Laborie
was born in the North of France
but has lived in the southern region of Cévennes
for more than twenty years.
The Rocheforts is his first novel to be published in English.

Falling for a French Dream