The social side of council life in France

I have now been an elected member of our village council for just over a year and some of the things I’ve undertaken as a councillor have been what I expected, but others haven’t. It has certainly been a sociable thing to do as I’ve helped to organise and taken part in lots of social activities, events and celebrations in the village and I’ve supped my fair share of social aperitifs too.

There is another side to the word social though, in terms of relating to the life, welfare, and relations of human beings in a community. This aspect of the role is where things haven’t been quite what I expected and at times have been rather emotional. One of the most difficult things was being part of a small group who had to make a decision as to whether to help (and how best to do so) a local family with four young children who had hit rock bottom and were struggling to put food on the table. In order to ensure there was a genuine need we were privy to their personal income and expenses information, which was scrutinised around the table. I can’t help but feel that to put themselves through this process they had to be very desperate and I felt very sad, but I hope the help we were able to give made things a little less stressful.

One of the other things I have been called upon to help with is translating for the English speakers in the village whose French isn’t quite as good as mine (which isn’t perfect I can assure you). This has actually given me quite a bit of confidence, increased my vocabulary and made me realise that although I do make mistakes with grammar and pronunciation (and I hate telephone calls in French) I really do get by quite well now. One of the unenviable tasks I was called upon to assist with was accompanying some English neighbours through the process of reporting a burglary that had happened at some point over winter while their holiday home in the village was unoccupied. Ironically this would have occurred shortly after the local Gendarmes held an information meeting in the salle des fêtes to raise awareness of burglary prevention. It was a stressful time for them, but I hope my help with translating for the Gendarmes, both at their house and when we filed the official report at the Gendarmerie, as well as helping them with the insurance claim process made things a little easier. I have certainly learned a lot about the French insurance system and how important it is that you understand the small print of your policy. 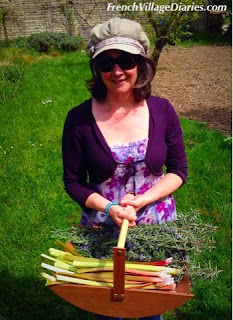 On a more positive note I am now the very proud owner of a handmade garden trug that I have already put to use. My French may well be better than our English neighbour who needed my help, but without a doubt, his woodwork and design skills are far better than mine. This is a perfect example of community spirit at its best, a good deed for a good deed and a new friendship in the village.

I’m certainly a more confident councillor than I was a year ago and I’m looking forward to carrying on helping to make a difference in the community in the coming year.