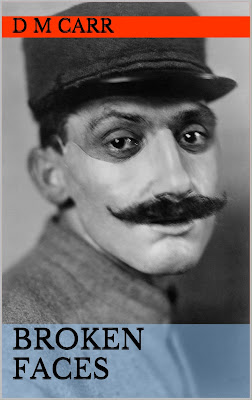 Freddie Chevalier, a wealthy farmer’s son, suffers a life-changing disfigurement in the Great War. He’s in love with his best friend’s fiancé and is determined not to miss out on the excitement of the Great War. Soon his life changes from one of idyllic days spent with his friends, Charles, Meredith and Lexi, staying at the Baldwyn’s ancestral home in Shropshire and working on his father’s farm in Jersey, to one of horror, pain and betrayal.
It doesn’t take long for Freddie to discover that the life he enjoyed before the war has vanished and that he is going to have to find a way to live with the consequences of the choices he and Charles have made.
Broken Faces beat 7000 other entrants to be a runner-up in the Good Housekeeping Magazine Novel Writing Competition (2012) they described DM Carr as as ‘one to watch’, They also added, ‘In Deborah Carr’s Downton-esque tale, Broken Faces, a soldier suffers a life-changing injury in the Great War’. The book also received a special commendation in that year’s Harry Bowling Prize.

Prologue
1918
As the weight of the plaster of Paris slowly increased on his face, he tried to steady his breathing and not give in to claustrophobia. It would be worth it in the end. He concentrated on the gentle American accent of the woman clasping his hand. She had a kind face. Her lack of shock when he’d been unmasked was admirable. Or was it simply she had grown used to seeing men such as he? They told him she was a sculptor. Someone overheard her say she saw beauty in the men she helped and that those men with missing noses and shattered faces were like the sculptures she created.
All he could think about, apart from the suffocating pressure on his nose and mouth, was a poem he’d heard someone recounting back at Les Invalides. Was it by Yeats? He wasn’t sure. He recalled it was about Easter in 1916, but not referring to the Front, even so the words still resonated. How did it go? He couldn’t quite remember. He was now one of the gueules cassées. One of the broken faces and his life would never be the same again.

I really enjoyed this book with it’s likeable characters, emotional scenes and plot twists, which gave quite a few will-they-won’t-they moments and as always with a novel set during the war you can never be sure of happy endings.

The main characters; Charles, his sister Lexie and friends Freddie and Meredith are off-spring of the wealthy classes who are used to a privileged lifestyle in the early 1900’s, but that doesn’t stop them all wanting to do their bit for the war effort. The men are keen to sign up for the Cavalry, but soon find that the ways of war have changed and life in the trenches of Northern France is worse than anyone imagined. The girls volunteer at hospitals in France and in London, where they too experience the horrors of war and images that will never leave them. I thought these aspects of the book were sensitively written and well researched.

Freddie finds it difficult learning to live with his war injuries and the way he is now seen by those around him, but with support from friends comes confidence, acceptance and love. The love in this novel is mostly portrayed in a restrained and 'proper' way, as you would expect of this period, but when things do get out of control it invariably ends in tears and betrayal. I was frustrated at times as they were all so stubborn and if they had listened to each other, it would have saved so much pain. I was satisfied with the ending and found myself wondering what the future has in store for them.

I would recommend this novel to anyone looking for an historical read where romance and history are nicely combined. 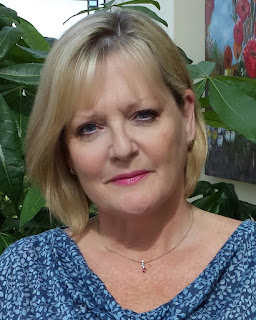 D.M Carr lives in Jersey with her husband and three noisy but adorable rescue dogs. She writes romances for Accent Press under the pseudonym Georgina Troy. Broken Faces is her debut novel in her own name. You can find and follow her here:

is available in ebook format from Amazon, link below.