It is carnival time. Towns and cities across France are in party mood and children are parading the streets in fancy dress. There is music, laughter, fun and the smell of crepes and popcorn is in the air. Last weekend Melle, one of our local towns was celebrating, but we were not in the best of spirits and it was a quiet car journey as we made our way there.

Originally, the plan had been to drop Ed and his guitar off, head on to the airport to drop Adrian off, and then return to hopefully catch some of the action and bring Ed home. However this winter has shown us that plans are not something that can be relied on. Ed was suffering a nasty cold/flu bug that had kept him in bed the day before with a very high temperature, so despite his music group playing at the carnival it was touch and go as to whether he would be well enough to join them. A good nights sleep and his (and the thermometer’s) assurances that the fever had gone and I was happy (so long as he wrapped up warmly) to let him go – the show must go on as they say! The next hiccough was a French Air Traffic Control strike that had been hanging over us all weekend. Despite crossed fingers, a text from the airline (a mere two hours before departure time) confirmed our worst fears, the flight had been cancelled. The expenses for the job had been paid, but now half the work (and the money for it) would go to someone else.

I like to think there is always an upside to an upset and as the rain dried up, the clouds parted and the sun came out, I have to admit it started to look like a nice afternoon for a carnival. With no flight to catch Adrian and I were able to watch Ed perform and enjoy the fun and we weren’t disappointed. I hope you enjoy these pictures.

The theme was the sea, so there were lots of pirates, a family of sharks, a giant octopus and the narrow streets were hung with strips of fabric to give a moving water illusion. 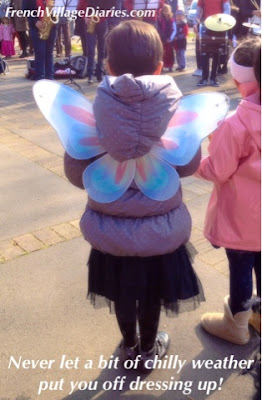 This post has been linked to The Dreaming of France link up at Paulita's blog. Click here to see more.