Cover reveal for All That The Heart Desires by June Moonbirdge 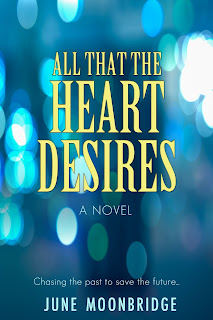 Today I am taking part in a cover reveal (with giveaway), not something I have done before, but a great way to help authors promote their books by giving them a social media shout out. All That The Heart Desires will be available at the end of June 2016, but was previously published as Racing Heart and you can read my review here.

At twenty-five, Desire Hart has experienced enough grief for a lifetime.
Changing everything in her life - her identity, her hometown and her country of residence, Desire is determined that nothing will prevent her achieving from finding her missing son. Not even love.
On a spring evening, she meets the golden boy of F1 racing, Lorcan Shore, and finds herself falling for him. Struggling to suppress her feelings, she realises he could help her get closer to the child she believes is her long lost son.
But nothing goes according to plan. Her identity is revealed by the press, Lorcan has a terrifying accident, and the trail to her son finishes in another dead end. So Desire does what she does best - she runs away.
Set against the glamorous backdrops of Monaco, Paris and Nice, ‘All That the Heart Desires’ mixes romance and mystery as Desire struggles to come to terms with her past.
Will she allow herself to accept love into her life again? 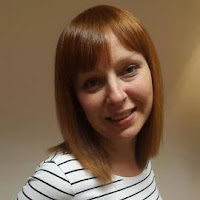 June was born in June and she always loved the moon. She comes from Slovenia, a country which got its independence almost three decades ago.

She studied economics, and quickly realised she hated it. Afterwards, she found herself working in a mainly male-dominated business; at first in automotive and later steel products. She can choose the best steel for your project, but don't, please don't, ask her which lipstick brand you should use.

She started to write in high school and was criticised by her teacher. Stubborn as she is, that didn't stop her. Under different pen names, she had stories published in magazines, and then went on to publish three books.

After having two children, and learning that her second child has autism, she married their father and carried on working. Work and family life left her with little free time. But the desire to write didn't die. When life somehow sorted itself out, she decided to write a novel in English and her first submissions were rejected…

For what happened then, re-read the third paragraph, second sentence above...

There are two ebook copies of this book to be won, just click on the Rafflecopter link below to enter, good luck!

a Rafflecopter giveaway
Posted by Jacqui Brown at 8:32 AM
Email ThisBlogThis!Share to TwitterShare to FacebookShare to Pinterest
Labels: Books, France, Romance