Jacques Forêt, a former gendarme turned investigator, delves into the murky world of commercial sabotage in a place where people lie and misrepresent, and where information is traded and used as a threat. The Vaux organisation is losing contracts and money, and Jacques is asked to undertake an internal investigation. As he works through the complexity of all the evidence, he finds more than he bargained for, and his own life is threatened. When a body of a woman is found, it appears to be suicide. But as the investigation takes another turn, Jacques suspects there is more to it. Who is behind it all and why? Will Jacques find the answer before another person ends up dead?

This is the second book in Angela Wren’s Jacques Forêt mystery series and I have to admit to developing quite a soft spot for him in book one (see my review here), so was looking forward to returning. In this book, work takes Jacques away from village life in Messandrierre and into the dark world of corporate espionage and yet again Angela Wren makes her readers think. There is a lot going on, both at work and in the village, with many characters and sub plots to raise my suspicions and for Jacques to keep track of. Sensibly he always has his notebook with him and I wished I’d done the same thing as at times I felt I’d missed something. Jacques neatly ties up all loose ends at the Vaux organisation, but with lots going on in the village, alongside the main plot, some things seemed to me to be left unfinished. Hopefully this was intentional as I’m certainly looking forward to reading more about Jacques Forêt from Angela Wren in the future.

There was a lot to love about this book, including strong characters, location and good plot twists, and happily I’m still a big fan of Jacques, despite him being so caught up in his investigations there seemed to be little time to focus on Beth and the possibility of a life together. Although as an independent woman, trying her best to set up her photography business in France, I think she was strong enough to cope with that.

Angela Wren I'm an actor and director at a small theatre a few miles from where I live in Yorkshire in the UK. I did work as a project and business change manager, very pressured and very demanding, but I managed to escape and now I write books. I've always loved stories and story telling so it seemed a natural progression, to me, to try my hand at writing. My first published story was in an anthology, which was put together by the magazine Ireland's Own and published in 2011. I particularly enjoy the challenge of plotting and planning different genres of work. My short stories vary between contemporary romance, memoir, mystery and historical. I also write comic flash-fiction and have drafted two one-act plays that have been recorded for local radio. My full-length stories are set in France where I like to spend as much time as possible each year.

Visit each blogger on the tour: tweeting about the giveaway everyday of the Tour will give you 5 extra entries each time! [just follow the directions on the entry-form]
Global giveaway open to all 5 winners

CLICK ON THE BANNER TO READ REVIEWS, EXCERPTS, AND INTERVIEW 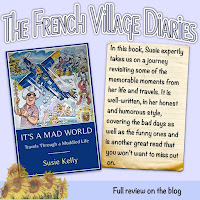 It's a Mad World