Book review of The Lies She Told by Lynda Renham

The Lies She Told by Lynda Renham

Having enjoyed Lynda Renham’s work for many years, I couldn’t resist reading her latest, The Lies She Told, even though it isn’t set in France and is also quite a departure from my normal reads.

Life in the village of Stonesend is pretty uneventful, that is until Detective Tom Miller is transferred there following a personal tragedy. He is not greeted well by local police officer, Beth Harper, who feels he is not up to the job. The day of his arrival, Kate Marshall, a teacher at the local school, is beaten in her own home and left for dead. The villagers are left in a state of shock. Was it a random attack, or something more personal?

When Kate is attacked in her kitchen, the quiet Oxfordshire village of Stonesend is thrown into a state of chaos. The once safe, friendly village, where community spirit was evident everywhere, is fractured by a seemingly impossible investigation whose scrutiny spares no one.

This was a difficult book to review, as I really didn’t want to let slip something that might spoil the cleverly thought out plot. In fact, there are many plots all carefully entwinned, taking us into the past lives of some of the characters, and tackling some difficult topics and relationship issues.

As Beth Harper and Tom Miller try to piece together the events and find the evidence they need, she is forced to reveal secrets about her recent divorce, and his arrival in the village is shrouded in unanswered questions. He has little understanding of village life and unfinished business in London, which often hampers their investigation, but I had full confidence in Beth from the beginning. Despite her personal problems, I knew she had an inner strength just waiting to surface.

I enjoyed following the effects of the shock waves that rippled out after the attack, affecting everyone in the village in a different way, and at some point, most of the characters became guilty in my head.

This book totally took over my mind as I tried to work out who did it, and why.

The Lies She Told was released by Raucous Publishing and is available in hardback, paperback and ebook format. This would be a great summer read for those of you who enjoy novels that make you think.

Lynda Renham is author to many popular romantic comedy and gripping psychological thriller novels. She lives in Oxford, UK. She has appeared on BBC radio discussion programs and is a prolific blogger, Twitter and when not writing can usually be found wasting her time on Facebook.

Posted by Jacqui Brown at 8:17 AM
Email ThisBlogThis!Share to TwitterShare to FacebookShare to Pinterest
Labels: Books, Reviews 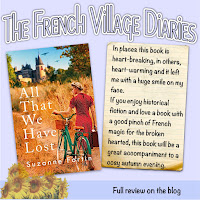