Book review of A Light in the Window by Marion Kummerow

A Light in the Window by Marion Kummerow

Margarete stumbles out of the bombed-out house, the dust settling around her like snow. Mistaking her for the dead officer’s daughter, a guard rushes over to gently ask her if she is all right and whether there’s anything he can do to help her. She glances down at where the hated yellow star had once been, and with barely a pause, she replies “Yes”.

Berlin, 1941: Margarete Rosenbaum is working as a housemaid for a senior Nazi officer when his house is bombed, leaving her the only survivor. But when she’s mistaken for his daughter in the aftermath of the blast, Margarete knows she can make a bid for freedom…

Issued with temporary papers—and with the freedom of not being seen as Jewish—a few hours are all she needs to escape to relative safety. That is, until her former employer’s son, SS officer Wilhelm Huber, tracks her down.

But strangely he doesn’t reveal her true identity right away. Instead he insists she comes and lives with him in Paris, and seems determined to keep her hidden. His only condition: she must continue to pretend to be his sister. Because whoever would suspect a Nazi girl of secretly being a Jew?

His plan seems impossible, and Margarete is terrified they might be found out, not to mention worried about what Wilhelm might want in return. But as the Nazis start rounding up Jews in Paris and the Résistance steps up its activities, putting everyone who opposes the regime in peril, she realizes staying hidden in plain sight may be her only chance of survival…

Can Margarete trust a Nazi officer with the only things she has left though… her safety, her life, even her heart?

A totally heartbreaking and unputdownable story about how far someone would go to save one life, that fans of The Tattooist of Auschwitz, The Nightingale and All the Light We Cannot See will adore.

Margarete’s snap decision to take the identity of the dead daughter of the family she worked for, is made purely for survival; her only chance to be a German girl, rather than a Jew. As the book unfolded and I fell into the challenges of her new life, it soon became apparent that it’s not just her story that is based on an intricate web of lies. Lies are told to escape, to deceive, to assert power over others and to gain financial reward. The longer the lies are lived, the more lies are needed to cover their tracks and to keep others from finding out the truth. Margarete is living a difficult and dangerous life as she and Wilhelm attempt to convince everyone, including his elder brother Reiner, that she is their sister, Annegret, and although she soon realises that a life built on lies is not an easy one, the alternative for her would be much worse.

I loved watching Margarete grow in confidence and become someone strong enough to make decisions for herself. I even developed a soft spot for Wilhelm as he battled with himself over his feelings for Margarete and his loyalty to his family and the Fatherland.

This is a cleverly crafted story that stirs some strong emotions as the different beliefs of the Jews, the Nazis and the Resistance are played out.

This book really drew me in as I wondered how it would end and how long the deception could go on, without being discovered. It didn’t end how I expected it to, but the fact it was left poised for a sequel made me very happy indeed.

This would be a great summer read for those of you who enjoy historical fiction, set in France during the Occupation, but with a different twist.

Marion Kummerow was born and raised in Germany, before she set out to "discover the world" and lived in various countries. In 1999 she returned to Germany and settled down in Munich where she's now living with her family.

Inspired by the true story about her grandparents, who belonged to the German resistance and fought against the Nazi regime, she started writing historical fiction, set during World War II. Her books are filled with raw emotions, fierce loyalty and resilience. She loves to put her characters through the mangle, making them reach deep within to find the strength to face moral dilemma, take difficult decisions or fight for what is right. And she never forgets to include humour and undying love in her books, because ultimately love is what makes the world go round.

Posted by Jacqui Brown at 7:41 AM
Email ThisBlogThis!Share to TwitterShare to FacebookShare to Pinterest
Labels: Books, History, Paris, Reviews, the Occupation 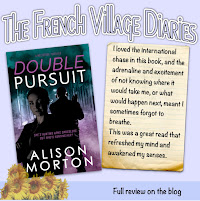